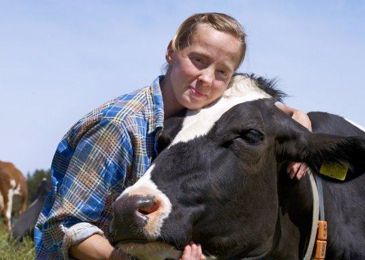 Managing mastitis in a robotic dairy is very different from a conventional dairy but it is not difficult.

Mastitis detection in an automatic milking system (AMS) is not particularly difficult but it is quite different to the way it is done in a conventional dairy. Dr Kendra Kerrisk, FutureDairy’s project leader explained that a major difference is that in an AMS, information about mastitis and milk quality is collected by the computer; whereas in a conventional milking system the information is collected by a person. “This means that traditional mastitis methods have limited relevance in an AMS,” said Dr Kerrrisk. Mastitis detection in an AMS hinges on the various alerts and reports generated by the support software that comes with an AMS. Alerts Each brand of AMS has a variety of on – line sensors that operate in real time, at every milking. They collect data relating to the milk quality of individual quarters; for example measures of milk conductivity and colour. The system will automatically generate ‘alerts’ when parameters reach a certain threshold. You can change the thresholds to suit your own situation. Reports The AMS software makes interpreting data collected from individual cows and individual quarters easy, because it generates summarised reports for each parameter. “It is extremely important that the daily routine includes reviewing these reports. This is critical to ensure clinical cows are detected and acted upon in a timely manner,” Dr Kerrisk said. Clinical cows Mastitis checks are best carried out before milking when clinical signs are easier to detect. Most AMS farmers set up the system to draft ‘suspect’ cows to a ‘treatment yard’ before their next milking. These cows can be checked for signs of a mastitis infection and treated if needed. “With an AMS you will need to re – think your practices and routines for keeping antibiotic milk out of the vat because many of the strategies you would normally use won’t work with an AMS.” For example an AMS unit will not detect a leg strap, tail tag or spray paint on the udder which are common aids used in conventional milking systems to alert the milkers when a treated cow arrives to be milked. “It is imperative that treated cows are recorded in the AMS software and that the milking units are instructed to discard or divert the milk for the entire withholding period. Make sure the discarding period is extended if the treatment period is extended. “We recommend making the computer entry before administering the treatment to prevent memory lapses resulting in antibiotic milk entering the vat.” Mastitis rates in AMS herds “At this stage we haven’t done any formal research to monitor mastitis levels in commercial AMS herds. However, the feedback we’ve had from individual farmers suggests that most believe they detect mastitis earlier with an AMS due to the alerts and reports.” “Once the herd and farmer are settled into the AMS routines, managers often indicate they hold the BMCC at a level that is lower than they achieved with conventional milking.