Breaking through the barriers 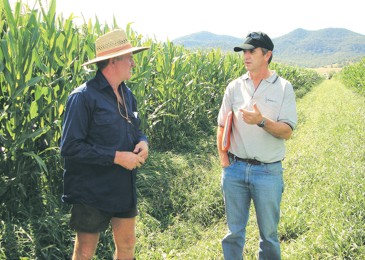 Hunter Valley, NSW, dairyfarmer Ian Simpson (left) with FutureDairy’s Associate Professor Yani Garcia
Hunter Valley dairyfarmers Ian and Maria Simpson are one of six valley dairying families working to break through the barriers to increasing their farm’s productivity. Working with Industry and Investment (I&I) advisers Anthea Lisle and Kerry Kempton the group is among the first dairyfarmers to apply FutureDairy’s Complementary Forage System (CFS) under commercial conditions. A CFS involves allocating a portion of the farm to intensive production to increase productivity from home-grown feed. It usually involves cropping, sometimes double or triple cropping. Crops may include a legume for nitrogen fixation, a bulk crop such as a cereal or maize for silage, and a brassica (forage rape) to break pest and disease cycles. Mr Simpson said the CFS suited their situation because they were keen to increase production but had limited land. The year-round calving herd currently peaks at 220 cows. The Simpsons plan to increase that to 270 in 2010 and 330 in 2012, increase average cow production from 8000 litres/cow to 10,000 litres/cow and reduce their reliance on purchased feed. To achieve that profitably the Simpsons plan to increase the amount of homegrown feed and its utilisation. “Our target home-grown feed utilisation is about 40,000 kilograms dry mat- 74 The Australian Dairyfarmer May-June 2010 Boosting productivity by applying forage system Hunter Valley, NSW, dairyfarmer Ian Simpson (left) with FutureDairy’s Associate Professor Yani Garcia. ter/hectare from irrigated crops,” Mr Simpson said. “That’s where the CFS fits in.” In previous seasons the Simpsons have grown maize for silage on a 10ha block leased from a neighbour and used their irrigated land to grow ryegrass and oats. The installation of two more centre pivots this January brought the total irrigated area to 82ha on the home farm. The CFS plan will help the Simpsons maximise feed utilisation from irrigated blocks. Table 1 outlines the planned crops for the coming year. An additional 25ha of irrigated land with perennial ryegrass and clover provides feed for grazing most of the year (except the hottest three months). Being an intensive system, the cost of inputs is high but the potential yield means the cost in $/tonne DM is comparable with pasture. The Simpsons have experience with growing maize and double cropping. “What’s new for us is the brassica and putting it all together to increase feed utilisation per hectare,” Mr Simpson said. “We are very excited to have the opportunity to be involved with cutting-edge practices and to have support from I&I advisers, FutureDairy researchers and our nutritionist Neil Moss.” The other farmers trialling the CFS are George Allen, Ross McDarmont, Rodney Richardson, David Williams and David Butler. Each of the farms is being monitored fortnightly to track milk production and feed consumption. FutureDairy project leader Associate Professor Yani Garcia said the CFS was an option for farmers who had already achieved high levels of pasture utilisation and were unable to access more land or water. At the Camden trials, about a third of the farm area was allocated for growing a complementary forage rotation, with the rest used for pasture (kikuyu over-sown with short rotation ryegrass every autumn). The complementary forage area was either double cropped (Persian clover and maize) or triple cropped (forage rape, legume and maize). During the past two seasons the CFS has achieved more than 25t DM/ha of utilisable forage across the whole farm, and nearly 30,000 litres milk/ha from homegrown feed. “Our Camden results demonstrate that the CFS system is a feasible way to intensify a dairy system while maintaining minimum reliance on purchased feed,” he said. Associate Prof Garcia said the keys to success were good crop, grazing and feeding management.