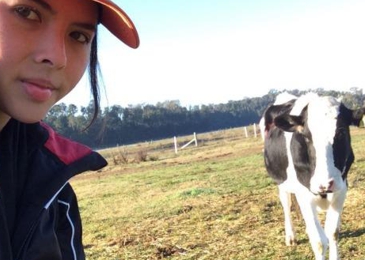 University of Sydney student Alexandra Green trained heifers to respond to sound, opening up possibilities for teaching cows to come to the dairy in response to a particular call.

FutureDairy researchers have discovered that cows can be trained to respond to sound, opening up possibilities for teaching cows to come to the dairy in response to a particular call.

Researcher, Dr Cameron Clark, said that while there was plenty of anecdotal evidence from farmers that cows could be called to the dairy, this study paved the way for farmers to use cow calling as a powerful management tool.

“It’s given us the confidence for further research on the best way to train cows and to look at the potential to train individual cows to respond to their own unique sound. It has potential application on farms with both conventional milking systems and robots.” he said. “

Dairy farmers can spend more than seven hours a week herding the cows up to the dairy for morning and evening milking sessions. The use of automatic gate s and calling sounds could eliminate this daily task,” he said.

The concept has even greater potential application in voluntary milking systems where cows move by themselves from the paddock to a robotic dairy and back to the paddock. In this system there’s no defined morning and evening milking period; milking occurs throughout the day and night.

One of the challenges with voluntary milking systems is that there is always a small group of cows that are less motivated to move around the farm; for example, cows in late lactation. Currently, these cows need to be ‘fetched ’ from the paddock for milking .

Although it is a small task, it must be built into the routine to avoid these unmotivated cows having milking intervals which extend beyond about 1 6 hours. Left any longer, these cows are at risk of reduced production and mastitis. “We are interested to know whether we can train these cows to respond to their individual sound and walk to the dairy to be milked by the robots.”

Amazing response to a maze.

The ‘cow calling’ study was the first step in understanding how cows respond to sound. To test the concept, student Alexandra Green designed a maze in a paddock using electric fencing, following similar principles that researchers use with studies of rats or mice in mazes.

The t-shaped maze had feed bins at both sides of the T. The 3-week study involved six dairy heifers aged about 20 months. Recognising that young heifers are shy, the team started with a few days training to familiarise the animals with the maze.

“We used the Pavlov’s dog principle to teach the cows to associate the sound with a feed reward.” Alexandra said. “Initially we played a sound when the heifers put their head in a feed bin. Eventually we put the sound only with the feed bin that had feed in it. We started playing the sound as soon as each cow entered the maze to see if we could teach them to follow the noise instead of going to the side they preferred.”

The team was amazed at how quickly the heifers picked up the signals. “Initially the cows guessed their way through the maze but they quickly started to turn their heads to where the sound was; they would really think about it,” she said.

“One of the heifers was hilarious. She got every single test correct from day two onwards. She’d kick up her heels in what looked like sheer delight as though she knew she’d chosen the right way !”

Four of the six heifers got a perfect score four times a day for four days in a row. The other two got it right 75% of the time. Although this was a small, introductory trial, the FutureDairy team is keen to continue the investigations given such promising results.

A follow up study is underway with cows wearing a collar that generates a sound. “Ultimately we hope we can develop a system where individual cows respond to their own sound by moving from the paddock to the robotic dairy for milking,” she said.