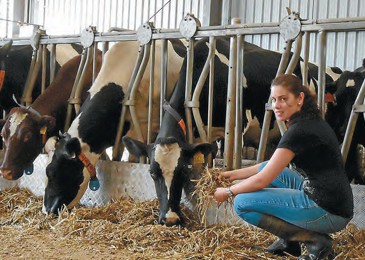 FutureDairy postgraduate student Tori Scott discovered that a feedpad with flexible access can be a useful tool for encouraging higher levels of intake of supplementary feed.
The location of a feedpad in an automatic milking system (AMS) can be a useful tool for encouraging higher levels of intake of supplementary feed, according to recent research conducted by the FutureDairy team. Postgraduate student Tori Scott investigated how the location of supplementary feed affected the time it took cows to move back to the paddock after milking, and the time taken to return for their next milking. Her findings suggest that a clever design for an AMS with a feedpad would position the feedpad with the flexibility to divert cows to supplementary feed either before or after milking, depending on the need, which may change throughout the season. It could even be possible to give some individual cows or groups of cows access to the feedpad before milking while others accessed the feedpad after milking. Automatic milking systems usually have programmable drafting gates that would enable this to be achieved. Feedpad management could be modified to meet different objectives within the system. For example, the decision about which cows to feed before or after milking would come down to the desired level of supplementary feeding and the preferred flow of cow traffic through the dairy. Feed after milking The first option is to offer supplementary feed after milking. “Cows who had access to the feedpad after milking spent up to 25 minutes less at the dairy waiting to be milked, and about half an hour less hanging around the feeding area,” she said. “Overall that meant that cows fed after milking spent almost an hour less at the dairy/feedpad; and this meant they spent more time grazing in the paddock.” Feeding after milking is the preferred option when the herd’s intake is predominantly pasture, and the supplement fed at the feedpad is a ‘top up.’ This option enhances cow movement through the dairy and maximises grazing opportunity. Feed before milking The alternative is to give cow’s access to the feedpad just before milking. “Cows fed before milking spent more time at the dairy/feedpad but returned sooner to the dairy for their next milking,” she said. “Feeding cows before milking could be a useful tool for encouraging cows to spend more time on the feedpad.” Milking frequency Overall, the location of the feedpad had no effect on milking frequency (the number of times a day that a cow is milked) or the time interval between milkings. “The reduction in time spent at the dairy/feedpad for cows fed after milking was offset by a longer time spent in the pad- dock before returning to the dairy,” she said. During the trials, postgraduate student, Nicholas Lyons, collected data on the pad- dock and grazing behaviour of the cows. Further analysis of the collective results is under way and is expected to provide more insight into these trends and how they may be used to manage cow flow within the AMS.