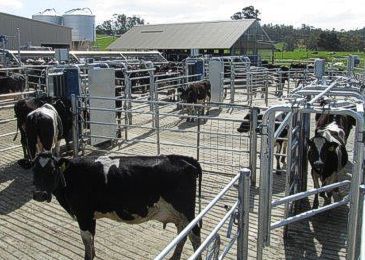 An automatic milking system based on controlled voluntary cow movement, uses ‘smart gates’ to direct cows to different parts of the farm.
Automatic milking farms have two options for moving the cows to and from the dairy:voluntary cow movement (either ‘controlled’ or ‘free’) and batch milking. FutureDairy Project Leader, Dr Kendra Kerrisk says the choice of cow movement in an automatic milking system (AMS) is influenced by personal preference and the availability of infrastructure and labour. Most Australian pasture-based AMS use controlled voluntary cow movement, where the cows move from the paddock to the dairy and back again on their own. Smart gates direct cows to different parts of the farm depending on when they were last milked and other criteria set by the manager. One-way gates ensure cows continue to progress through the system rather than back tracking. The success of voluntary cow movement relies on accurate allocation of pasture and supplementary feed. “Voluntary cow movement is a flexible option in terms of labour and lifestyle because milking can occur any time of the day or night without human intervention,” Dr Kerrisk said. “However because the dairy operates all the time, someone needs to be on call to deal with the occasional alert. Some people don’t like the idea of being on call as it intrudes on their lifestyle.” Free cow traffic Free cow traffic is similar to controlled cow traffic except that cows are not restricted or directed by gates. “To date there are no known pasture-based free cow traffic installations. This type of cow traffic is often implemented in systems where cows are housed indoors for all or most of the year,” she said. There are no drafting gates and cows are free to move in any path between milking, feeding and loafing without restriction. Like controlled cow movement, free cow movement offers flexible working hours. Cows that haven’t volunteered for milking need to be fetched two or three times each day. These are most typically stale cows or inexperienced heifers. And like controlled cow movement, someone needs to be on call to handle alerts. Free cow movement is suited to dairy farms with an indoor system. It tends to appeal to farmers who want maximum flexibility for labour or who want cows to have complete freedom to choose when they are milked, as opposed to cows being drafted for milking as they move between areas of the barn. Batch milking With batch milking system, cows are restricted to the designated paddock and are fetched to the dairy for defined milking sessions. To reduce the time cows spend waiting at the dairy the herd is split into several milking groups. In a pasture-based AMS with batch milking, automatic gates can be programmed to open at scheduled times for the cow to move to the dairy. Cows may be left at the dairy to move voluntarily through the milking units and back to their designated paddock. Depending on the farm layout and feed allocations the farmer may need to make sure all cows have returned to pasture and close the gate before bringing the next milking group. Drafted cows should be attended to in time to allow them to return to their group before the next group is brought to the dairy. “Batch milking probably doesn’t save much time over conventional milking, particularly with smaller herds, but it is less strenuous than standing in the dairy putting on cups. And compared with voluntary cow movement, a batch milking system may require fewer laneways and gates,” Dr Kerrisk said. Batch milking may appeal to farmers who do not want to be on call 24 hours a day, those who are uncomfortable with the concept of voluntary cow movement or are daunted by the need for accurate pasture allocation, those who want absolute control over the milking frequency of individual cows or those who want to manage different groups within the herd with different feeding regimes.