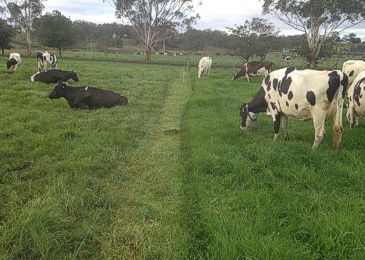 The FutureDairy team has discovered that the grazing and milking routines of cows influences their state of pasture that cows access, and their milk response to grain. Individual feeding systems could be used to adjust a cow’s diet according to her access to quantity and quality of pasture.

Research by the FutureDairy team suggests that individual feeding systems can be used to customise each cow’s grain-based supplement according to their access to pasture.

FutureDairy researcher, Dr Cameron Clark, said the digestion of grain-based concentrates fed at the dairy is affected by the timing and quantity of pasture intake.

“Our findings suggest that when cows are offered more than 5kg/DM/day of grain-based concentrate and access inconsistent levels of Kikuyu pasture depletion, the milk production response to grain-based concentrate decreases. Current work is relating these findings to cows offered ryegrass,” Dr Clark said.
With a conventional dairy, the whole herd leaves the paddock to be milked, and the cows arrive at the next break after milking across the next few hours (equivalent to the milking period). Previous work has suggested that pasture allowance is depleted by about 40% during the 2-3 hour period between the first and last cows arriving in the paddock after milking.

Cow order through a conventional dairy is quite consistent, based on their dominance position in the herd. So the first cows through the dairy will always be the first to reach the fresh pasture and the later ones to be milked will always arrive to depleted pasture at the new break.

Cows typically graze pastures in layers from the top to bottom with the first cows arriving at a break usually accessing greater protein and lower fibre than the last cows to arrive at an allocation.
In this situation, farmers with the facilities for individual feeding could consider adjusting the ratio of protein to energy according to the individual cow’s milking order.

“The ration for the cows that enter the dairy towards the end of the milking session could be adjusted to compensate for the lower quantity and quality of pasture that is available on their arrival at the paddock.”

In an AMS, cows voluntarily leave the paddock to be milked and then arrive at the next break at varying times of the day and night. Rather than moving to the dairy in a single mob twice a day, they move individually or in small groups, anytime throughout the day and night.

Dr Clark said that some AMS cows learn when the next fresh break becomes available each day and move to the dairy accordingly.

“Only a relatively small proportion of the herd will consistently gain access to either stale or fresh pasture. Most cows gained access to pasture at variable stages of depletion when their traffic is monitored over a reasonable period of time.

“Our next step is to evaluate whether the benefits of this approach will outweigh the costs. If it is profitable, software adjustments would be needed to create this function,” Dr Clark said.