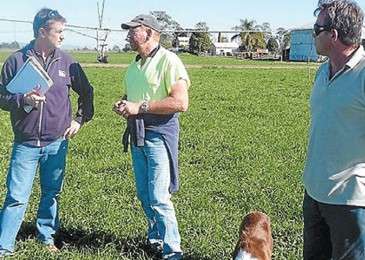 FutureDairy project leader Yani Garcia, Singleton, NSW, dairyfarmer George Allen and project officer David Deane inspect pastures on Mr Allen’s farm
Dairy pastures grown within a complementary forage system (CFS) can outperform conventional pastures. This is one of the findings from the first year’s results of FutureDairy’s Hunter Valley monitor farms. The study involves close collaboration between six Hunter Valley farmers, Indus- try and Investment (I&I) and the FutureDairy team. Kerry Kempton and Anthea Lisle, both with I&I, worked closely with the farmers during the project. Ms Kempton said that four of the six participating farms had achieved yields of more than 27 tonnes dry matter (DM) a hectare from the CFS. And on three farms, the pasture phase in the CFS contributed more than 12 tonnes of DM/ha. A CFS involves allocating a portion of the farm to intensive production to increase productivity from home-grown feed. It usually involves cropping, some- times double or triple cropping. Crops may include a legume for nitrogen fixation, a bulk crop such as a cereal or maize for silage, and a brassica (forage rape) to break pest and disease cycles. Participating farmers chose a crop combination to suit their individual situation. Four farms grew a typical CFS with summer bulk crop for silage followed by an autumn-sown pasture/forage crop mix. The fifth farm operates a cut-and-carry system so grew three crops while the sixth ‘control’ farm grew a crop for grazing and silage followed by perennial ryegrass/clover pasture. The crop and pasture combinations grown were: 1. CFS: Maize for silage followed by annual ryegrass/brassica/oats; 2. CFS: Maize for silage followed by annual ryegrass/brassica ; 3. CFS: Maize for silage followed by annual ryegrass alone; 4. CFS: Forage sorghum for grazing/silage followed by ryegrass/ lucerne/chicory/oats; 5. Cut and carry: maize for silage followed by maize for silage followed by triticale/maple peas; 6. Control: forage sorghum for grazing/silage followed by perennial rye- grass/clover. Two of the farms achieved almost 15 tonnes DM/ha from their pasture phase plus another 20 tonnes/DM/ha from maize silage grown on the same land earlier in the season (see Table 1). Ms Kempton said irrigated dairy farms in the Hunter area average 10-12 tonnes DM harvested from pasture for the whole year. “Our monitor farmers have done well to harvest 10-14.5 tonnes DM/ha from pasture,” she said. “It’s a fabulous result when you add in the maize or sorghum yields as well.” While most of the farmers had grown crops before, the intensively managed CFS was a new approach. Growing maize and brassicas was new for some. Ms Kempton believes several factors contributed to the high pasture yields with the CFS, with a key reason being the planning process undertaken by each farmer, well before the first seed in the CFS is planted. “They are then clear in their minds about what needs to be done and when to do it,” she said. “Although there were the usual glitches and setbacks that occur on any farm, mostly the plans have been implemented with a fair degree of precision. “So, all the little details like having seed and fertiliser on hand early, sowing right on time, paying attention to the water and nutrient needs of the plants, and grazing or harvesting at the right time, really do add up to a much better yield at the end of the year.”