In search of the dream cow 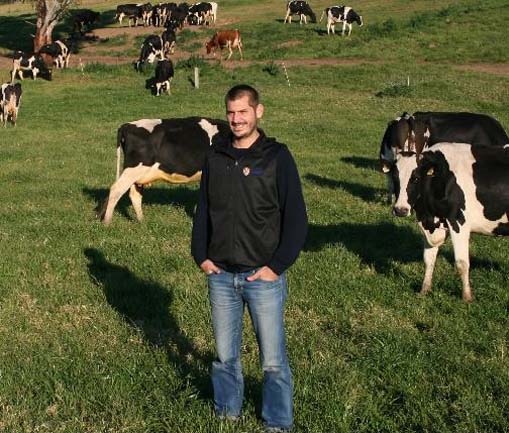 FutureDairy researcher, Juan Molfino identified a small group of cows that dairy farmers dream of: those that produce more milk from fewer milkings.

She’d be a dairy farmer’s dream: a cow that yields more milk from fewer milking sessions.This is just the cow that the FutureDairy team has been looking for; and automatic milking systems (AMS) collect the information needed to track her down.

In a preliminary study, researcher Juan Molfino found that this sort of dream cow does exist, at least on Grant and Leesa William’s robotic milking farm at Hallora, West Gippsland, Victoria.

The Williams’ 240-cow, spring calving herd is milked by four robots. The couple also has a neighbouring farm which milks 300 cows through a 40-unit rotary. With an AMS automatically collecting detailed records about every cow’s milking sessions, Juan was able to analyse data from 226 cows in the Williams’ herd over four seasons.

Juan identified two small groups of cows, which he refers to as ‘efficient’ and ‘inefficient’ cows. The efficient cows produced 28% more milk from 11% fewer milkings than the inefficient cows, after allowing for the effects of stage of lactation, age and other factors that are known to influence milk production.

Because the efficient cows visit the robots less often they spend less time and energy walking around the farm. Juan said this was important for large herds in pasture-based systems where some paddocks may be more than 1km from the dairy. “Efficient cows create the opportunity to increase the production per robot by freeing up time to milk more cows,” he said.

With such exciting initial findings, the FutureDairy team is keen to investigate further. Juan is now examining data from more commercial AMS farms to see if they too have groups of efficient and inefficient cows. “We really want to better understand who those efficient cows are and what influences their milking behaviour. Efficiency is likely to be influenced by a combination of genetics, management and animal behaviour.

If we can unravel that we may be able to develop better ways to manage them. Even better would be to develop management practices to improve the efficiency of inefficient cows.” Juan will use modelling to look at the economic impact of increasing the proportion of efficient cows up to say 30% or 50% of the herd. Grant Williams is keenly awaiting the findings.

After six years of robotic milking his AMS is running smoothly and he is always on the lookout for refinements to improve the efficiency and profitability of robotic farming. “The beauty of AMS is that you collect lots of data which can give a lot of insight into individual cows and the overall system. We’ll be interested in testing management adjustments that could give us more dream cows.”