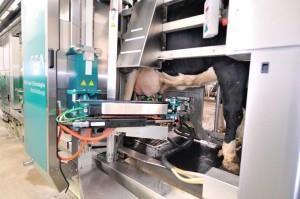 DAIRYING in the subtropics at Dobies Bight, NSW, Wayne and Paul Clarke know too well the importance of keeping cows comfortable in hot and humid weather. When they installed an automatic milking system (AMS) they entered relatively unchartered territory in terms of keeping cows cool.

A year down the track, they report simple strategies, including shade at the dairy, have been effective while maintaining voluntary cow movement to and from the dairy.

Initial research conducted by FutureDairy PhD student Ashleigh Wildridge suggests that providing shade at an AMS dairy can improve overall cow performance without compromising animal welfare. “The aim of providing shade at the dairy is to improve cow comfort, but we wanted to make sure it didn’t create an unintended risk of lameness from cows standing on concrete for too long,” Ms Wildridge said.

During the summer of 2015/16, Ms Wildridge split the University of Sydney’s AMS herd into two groups, one with access to shade at the dairy holding yard and the other without.

“On average, the cows with access to shade spent 2-3 minutes longer at the holding yard before entering the milking units,” she said. “This did not appear to be long enough to increase the risk of lameness but it was long enough to improve measured indicators of cow comfort and performance.”

Cows with access to shade had reduced respiratory rates, averaging 68 breaths per minute (bpm) compared with 73bpm for the no shade group.

Feedback from Australian AMS farmers in hot areas suggests that providing shade at the dairy and around the farm can be managed to improve cow comfort and maintain voluntary cow movement, however the grazing behaviour of AMS cows in hot weather appears to be different to conventional milking systems.

When the Clarke brothers installed four DeLaval VMS units in 2015 they included seven metre by 16m area of shade cloth over the holding yard. The concrete floor was covered with rubber for hoof comfort and small fans were installed at the robots to keep flies away.

They also maintained shade areas around the farm. “Although we’ve only had the AMS for one summer, we’ve been pleased so far with our ability to manage hot weather,” Wayne said. “We had planned to put sprinklers at the holding yard but so far we haven’t needed them.”

In hot weather, the Clarkes’ cows have access to their usual pasture allocation as well as an area with shade from trees. “We rotate between a couple of areas of tree shade so that they don’t get too boggy,” Wayne said.

“This is quite similar to what we did before we installed the robots, although we slightly adjusted the timing of access to the shaded areas to maintain voluntary cow movement.”

Surprisingly, the cows move a lot more freely between the shade and grazing area now.

Overall the Clarkes observed the cows chose to spend more time grazing in the sun than before the robots were installed.

“They didn’t show any signs of heat stress suggesting that the combination of shade at the dairy and under trees allowed them to reduce their heat load,” Wayne said. “Other AMS farmers have told us they see similar cow behaviour in hot weather.”

“We didn’t do any formal research on cow behaviour in hot weather but we did notice much more dynamic movement of cows between shade and grazing areas than we would have expected in a conventional milking system,” she said.

Hitting home in Shepparton
Peter and Kathryn Costello, who had an AMS near Shepparton, Victoria, for four years said hot weather did affect voluntary cow movement on their farm, which had shade and sprinklers at the dairy but little shade in the paddocks.

“We had a shaded feedpad which was 50m from the dairy,” Mr Costello said. “In hot weather the cows were reluctant to leave the feedpad, which played havoc on voluntary cow movement. Instead of having a regular trickle of cows visiting the dairy, we’d end up with them all at the feedpad and when we moved them on, we’d have a queue at the dairy.”

To encourage cows to spend time in the paddocks, the Costellos had a portable shade structure built that would accommodate 40-50 cows.

“It was quick and easy to move from paddock to paddock and it allowed the cows to cool down then resume grazing,” he said. “Having shade in the paddock improved voluntary cow movement in hot weather. In hindsight it is critical to have the design right, to maintain voluntary cow flow during hot weather.”

“Although there’s limited research data on managing heat in AMS herds, it should be considered right from the design stage,” she said. “Look at shade options across the whole farm, including at the dairy.

“Think carefully about the potential impact on voluntary cow movement. For example, it’s probably not a good idea to have a shaded area at the dairy that will accommodate the whole herd as cows may be inclined to stay there all day.

“Intermittent sprinklers at the holding yard are very effective in reducing heat load and may have the added benefit of encouraging cows to move from the shaded area into the milking units.”

She suggested positioning the shade over the holding yard so that it was not immediately adjacent to the milking area.

This may prevent cows congregating close to the milking units and blocking access to their herdmates.

While the obvious place to put shade is in the pre-milking holding yard, Assoc Prof Kerrisk said it could be worth also having shade immediately post milking, so that cows did not have to walk from the milking unit into direct sunlight, which might reduce their exit speed.