Less is best when it comes to brassica 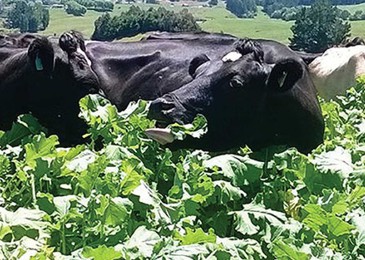 FutureDairy’s research found that a lower sowing rate results in the same drymatter yield and feed quality, with a crop density that cows prefer to graze.
Dairyfarmers sowing brassica – or forage rape – can save on seed costs this season, with FutureDairy’s latest research showing that a lower sowing rate results in a crop density that cows prefer to graze, with similar drymatter yield and feed quality to crops sown at higher seeding rates. FutureDairy project leader, Associate Professor Yani Garcia, said the field experiment compared cows’ grazing preferences for brassica sown at 2, 3.5 and 5kg/ha. All three sowing rates produced similar dry matter yield and feed quality but the cows preferred to graze the crop sown at 2kg/ha. “Although the differences were not big, when given the choice a consistently larger proportion of the herd chose to graze on the brassica sown at lower density – 2kg/ha,” he said Assoc Professor Garcia. “Brassicas are usually a relatively cheap crop to sow. But dairyfarmers can cut establishment costs by reducing the sowing rate to 2-3 kg/ha with the confidence it will have no effect on dry matter yield or quality. In fact, the cows will actually prefer to graze it.” The findings were the same regardless of the grazing method used: takeall (a single, heavy grazing) or multiple (a series of lighter grazings with a regrowth period in between). However the preference effect was more marked with takeall grazing. “The drawback of a lower density crop is that it may be less competitive with weeds in the initial stages, so farmers should always seek advice from a local agronomist before deciding on sowing rates,” he said. The research was conducted by University of Sydney PhD students Edward Stefanski, Damien Tanner, and Santiago Farina. Nitrate toxicity news to avoid nitrate toxicity and the potential for over-grazing, it is usually recommended to restrict cows’ access to forage rape to about 5kg DM/day. This can create a logistical challenge in some situations, for example large herds or an automatic milking system. The FutureDairy team found that well-fed cows grazing forage rape in the morning grazed for only 30 to 60 minutes, in which time they consumed 2-4kg DM/cow. Consistently after an hour and a half, more than 80% of the herd was resting. “If cows are fed a well-balanced diet, and are not too hungry when offered the brassica, it may be less critical to restrict access to prevent nitrate toxicity and over grazing,” said Assoc Professor Garcia.