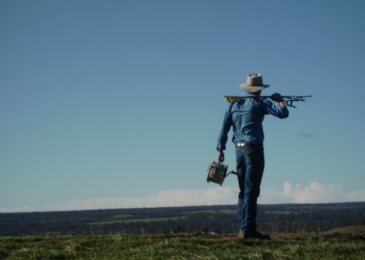 Clever pasture allocation strategies could hold the key to milking more cows per robot in a grazingbased automatic milking system.
Clever pasture allocation strategies could increase the capacity of milking robots in Australia’s grazing based systems, according to recent research conducted by FutureDairy postgraduate student, Alex John. His findings suggest some farmers may be able to milk an extra 10 cows per robot by changing the amount of feed offered in the early evening. In Australia’s grazing based systems, the capacity of milking robots depends largely on milk production levels and the number of times cows are milked each day. FutureDairy project leader Associate Professor Kendra Kerrisk said a key to getting the most out of capital investment in milking robots was to minimise the amount of time the robots are idle. “High robot utilisation is achieved when milking’s relatively evenly distributed throughout the 24 hours of a day,” Assoc Prof Kerrisk said. Most of Australia’s grazing based automatic milking systems (AMS) operate with voluntary cow movement: the cows move by themselves from the paddock to the dairy and around the farm. Grazing cows tend to be less active after midnight, so robots are often idle during the early hours of the morning. “Voluntary cow movement has a strong influence on robot utilisation. We want to encourage cows to leave their paddock regularly throughout the day and night so that they have the opportunity to be milked.” “Feed is the primary motivator used to encourage voluntary cow movement and this is why pasture allocation is critical. “We know that better cow movement is achieved by offering cows three allocations of pasture a day rather than two which is typical of a conventional milking system.” Mr John studied two commercial dairy farms with consistently good voluntary cow movement. “On most AMS farms, cows receive about the same amount of feed at each allocation but both of these farmers offered less during the evening.” “One of the farms achieved more evenly distributed milking’s, which meant better robot utilisation and less time spent fetching cows. In addition to the labour saved in fetching cows, Mr John said the results suggest that this system may enable AMS farmers to milk more cows per robot, achieving a better return on investment in milking equipment. While further research is needed to develop practical recommendations, this study is the first evidence of being able to achieve an evenly distributed milking pattern over a 24-hour period with a reduced need for fetching in a commercial, pasture-based automatic milking system.