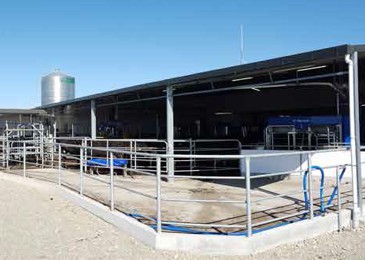 The challenge with automated milking is not the cow or the technology, it’s the farmer.

Alvin Reid’s 500 cows at Pleasant Point on New Zealand’s South Island are grazing all year-round in open pasture and walking up to three kilometres a day to get themselves to one of the farm’s six DeLaval VMS™’s (voluntary milking systems). They milk more than 2 times a day, have less mastitis and are producing more milk with less staff on the farm.

Reid installed six DeLaval VMS™’s in 2013 and his cows made the adjustment in a matter of weeks. “The challenge with automated milking is not the cows or the technology,” says Reid. “It’s the farmer.”

“Everything I learnt about dairy farming over the last 30 years had to be thrown out the window. You have to be able to think in a completely different way,” he adds.

Rhys Grant, Reid’s farm manager with a deep understanding of the cows agrees. “I don’t touch the cows anymore. If they are lying down in the paddock, or standing ‘chewing’ in the races, I leave them alone. They will eventually get up to look for a feed, and if the pasture is eaten out, they know to come to the VMS’s and the Smart Gate interchanges to be milked and shown a new pasture.” Reid adds: “My cows run the farm now. Not me.”

And his cows seem pretty happy about it. Animal health costs have dropped on the farm. Despite the extensive walking there has been a decrease in lameness and Reid expects that cow longevity will improve to an extra lactation because of the new system.

“We have about 4.5 lactations per cow and we think we will now be able to extend that to about 5.5 lactations,” he says.

The seasonal calving system in New Zealand is based on calving the entire herd in springtime over 8-10 weeks. This is to make sure the ‘peak grazing demand’ coincides with the ‘peak supply’ from quality pasture.

Feeding costs are kept extremely low with this system and robotic milking can be implemented without adding to the pasture management or feeding costs. Reid says the drop in labour costs and health costs are balanced out with the higher capital investment costs. However, Reid believes the potential in increased cow longevity, proactive farm management and labour retention makes the new system worthwhile.

Choosing DeLaval was an obvious choice for Reid given his long history with the company. Reid currently runs six farms in New Zealand with DeLaval as his main supplier. “All our rotaries are DeLaval and we have always been given good service from the guys there. So, when I looked at the robots, they were my main milking equipment supplier to talk to.”

Sitting around the table with DeLaval to understand the 3-way grazing concept, Smart Gate interchanges and one-way gates was daunting at first. However once you understand it from a ‘cows’ perspective, it all falls into place,” says Reid.

“DeLaval put in a lot of hard work in helping us organize the 3-way grazing system, providing layouts and ensuring we understood exactly what was involved, with realistic expectations. Nothing can prepare you for the first few weeks of milking – in fact the cows learnt the system before us!”

For Reid, he knew he had other brands that he could choose from but he also knew that it’s not just about the robot. “It’s far more important to deal with a team of people that have good farm system knowledge and dairying skills. Together we designed a layout that allowed us to manage seasonal caving in an optimal way. For example the circular VMS layout allows us to dedicate 1 or 2 VMS’s to only harvest colostrums during calving season. This is extremely efficient as it frees up milking time in the other VMS’s for our other cows. We also have a VMS that is set up to manage ‘training’ new cows without interrupting the main herd.”

Reid also runs DeLaval DelPro™ on his VMS farm and besides all the important VMS-related KPI’s, he uses it to help with proactive daily decision making and farm/milking management. Last season they achieved within the top 10% when it came to submission and in-calf rates in New Zealand.

He has also added some of his own technology to improve the running of the farm. Web cameras are dotted around key areas of the farm so that Reid can see what’s going on no matter where he is. Not averse to developing and changing, Reid is the ideal farmer to introduce automated milking into his pasture-based herd.

And if he was going to start up another farm tomorrow? “Both my wife and I said after just a few months of converting this farm that this is the way to go. I would do another robotic system tomorrow. Like I said, the biggest challenge is the farmer, not the technology.”