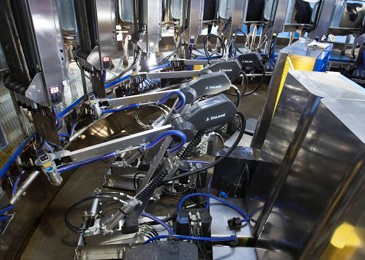 Dairy farmers get to sleep in This week heralds a new era in dairy farming with the revelation of the robotic rotary, a world first, developed by DeLaval in collaboration with Australia’s FutureDairy project. Designed for Australian grazing herds with more than 300 cows, the robotic rotary automates most milking tasks, enabling the job to be performed as a background activity, without the presence of a human operator. FutureDairy Chairman, Shirley Harlock, said the robotic rotary was a major step towards addressing two of the key challenges facing the industry – the availability of labour and the lifestyle associated with dairying. “This is one of the most exciting developments that has occurred in the 40 years I’ve been dairy farming,” Mrs Harlock said. “Although it won’t suit all dairy farmers, the robotic rotary offers considerable benefits in terms of enabling more flexible working conditions and improved lifestyle.” While automatic milking systems have been widely adopted overseas, their application on Australian farms has been slower, mainly because the technology was developed for European herds which are smaller, and housed indoors for most of the year. FutureDairy research has proven that automatic milking systems can operate effectively in Australia’s pasture-based system, achieving both high pasture utilisation and acceptable AMS unit utilisation. However the available technology was best suited to herds of less than 300, due to capacity (number of cows that can be milked by each unit in a 24-hour period) and cost. The robotic rotary offers a better solution for larger Australian dairy herds. A limited commercial release is planned for 2011 under the brand name DeLaval AMRTM (automatic milking rotary). The recommended retail price for the DeLaval AMR TM has not been announced yet but it will be competitive in the automatic milking segment for larger herds. It is likely to cost more than a conventional rotary with all the ‘bells and whistles’ but the running costs would be significantly lower because of reduced labour input. The next step in Australia will be the installation of robotic rotaries on two commercial farms in 2011. These installations will be closely monitored and supported by DeLaval and the FutureDairy team. The experience provides the opportunity to identify issues and continue the development of the system in the ‘real life’ situation. Although developed for Australian conditions, the robotic rotary is flexible enough to operate under a variety of dairying systems such as free-stalls and loose housing which are typical of overseas industries. The potential value for larger herds overseas has already been recognised, with the recent announcement that the DeLaval AMRTM will receive the prestigious 2010 Eurotier Gold Medal* in Germany on 16 November 2010. Collaboration The development of the robotic rotary was possible through a private-public-industry collaboration of Dairy Australia, DeLaval, The University of Sydney and Industry & Investment, NSW. “DeLaval’s engineering and product development expertise and the FutureDairy team’s understanding of the pasture-based dairy systems proved to be a powerful combination. It’s an outstanding achievement – from idea to reality in about five years,” Mrs Harlock said. Senator the Hon.

Senator the Hon. Joe Ludwig, Minister for Agriculture, Fisheries and Forestry, officially opened the pilot robotic rotary at Elizabeth Macarthur Agricultural Institute (EMAI) in Camden, NSW on Friday 12 November 2010, and a commercial version will be launched in Germany at next week’s Eurotier trade show.

* Eurotier Medals are awarded by an independent innovations commission. Criteria include being a new concept, importance of product for practice, conformity with animal welfare, impact on farm and labour management and the environment and energy situation. For more information visit http://www.eurotier.de/criteria.html