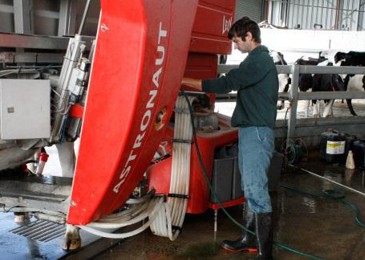 The Crosby’s were one of five automatic milking farms to participate in Future Dairy’s AMS labour study.
An automatic milking system (AMS) offered two generations of the Crosby family the opportunity to dairy farm while maintaining off-farm employment. For parents Doug and Lyn, it was a step towards retirement in the longer term. For son their Bill, it opened up the potential to farm full time in the future. Bill said the flexibility that came with automation is what made it possible for them to consider becoming dairy farmers in the first place. “We wouldn’t have considered going dairying if it meant we were tied to twice a day milking. We wanted d the buffer of off – farm income and automatic milking made it possible for us to do that,” Bill said. The family researched their options for 18 months before deciding to convert a property they had bought a few years earlier to a dairy farm with robotic milking. An electrician, Bill lives at Naracoorte, SA, 50km from the AMS farm where Doug and Lyn live. In May 2009 they began milking 150 cows with two robots. The year round calving herd averages 7500L/cow from pasture and 1.8 t concentrates. FutureDairy calculated the farm operates with 0.75 full time equivalent staff, or 173 cows per full time equivalent. Conventional milking systems average about 99 cows per FTE for conventional milking systems (Dairy Farm Monitor Project Victoria, 2012/13). Milking related tasks take about three hours a day. The shortest day (for example, on the weekend) involves about three hours in the morning and as little as 30 minutes in the afternoon. “We both spent more time at the dairy farm in the first 12 months while we were finishing the set up and learning how to manage the system,” Bill says. Once the AMS was running smoothly, Bill and Doug adapted the timing of activities to suit their individual preferences. Although the daily routine is fairly consistent, Doug prefers to rise at dawn and spend a couple of hours on the AMS farm. During the middle of the day he works off-farm and comes back to AMS jobs in the late afternoon, finishing up at sunset; about 8pm in the summer and earlier in the winter. Bill has a 45 minute drive to and from the AMS farm, so prefers to concentrate his AMS tasks into the main part of the day, between about 8am and 4:30. If he has urgent electrical work to do, he might attend to that first and arrive at the farm a bit later. FutureDairy project leader, Associate Professor Kendra Kerrisk said that while automatic milking offered flexibility for sharing the workload and daily routines to suit individuals, an AMS requires an on-going commitment of time to run the farm and the business. “Even with automatic milking, a dairy farm is not a part time job. The Crosby’s have been very successful in managing their AMS farm with two part time roles. But the critical thing is that they are committed to putting in the time needed each day. In particular, the first year of automatic milking requires intense, focussed attention as the operators and cows adapt to the different practices involved in automatic milking,” said Assoc. Prof Kerrisk. After five years of automatic milking, the family is now starting to plan the transition for Doug to move towards retirement and Bill to eventually run the AMS farm full time. “It has been hard work at times but we are really happy with our venture into dairy farming,” Bill said.

The Crosby’s were one of five automatic milking farms to participate in FutureDairy’s AMS labour study.Visit www.futuredairy.com.au to see all five case studies