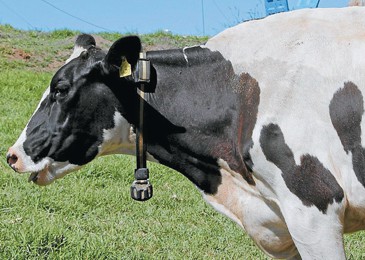 Collars that monitor cow activity and rumination have the potential to be used for early identification and treatment of left displaced abomasum (LDA).

Research conducted by the Future Dairy team has identified the potential to use a device that monitors activity and rumination for early identification of left displaced abomasum (LDA) in dairy cows.

A metabolic disease in recently calved cows, LDA is associated with high intake of carbohydrates in combination with a relatively empty rumen. This can occur with illnesses such as mastitis and metritis, which tend to reduce feed intake. With cases having increased in recent years, LDAs incur significant costs through surgery, milk loss and cow deaths.

A cow developed LDA during a study conducted by postgraduate student Saranika Talukder to evaluate the use of activity and rumination sensors (SCR HR LD tags) for heat detection.The tags were mounted on neck collars worn by the cows.

The LDA diagnosis was confirmed by a veterinarian and surgically corrected.The surgery also revealed the cow had metritis. “Because the cow was wearing the activity monitor when she developed the LDA we had the opportunity to analyse differences in the data between the LDA cow and her healthy herd mates in the study,” Mrs Talukder said.

“This suggests it could be possible to use real-time data collected by commercially available activity monitors to identify an LDA in a cow at least five to six days earlier than the actual date of clinical diagnosis.

“While there is still more research to do, the ultimate aim would be for earlier diagnosis and treatment to result in fewer deaths, less milk yield loss and lower-treat- ment-cost cows, which would be a significant financial benefit to the farmer.”

Mrs Talukder said the devices that re- corded activity and rumination in real time may have the potential to be used for early identification and management of a number of health issues.

“The case of the LDA cow has shown us a new potential application of these devices,” she said. “What we need to do now is build up a bank of data to be able to compare the profiles between a large number of healthy cows and those with LDA or other disorders that depress well-being and productivity, such as lameness, mastitis, ketosis, dystocia and milk fever. These data could be used to develop models for early detection of disorders based on real-time rumination behaviour in cows.

“Our work provides an additional way to get more value from data collected by sensors.”

FutureDairy’s major sponsors are Dairy Australia, DeLaval and the University of Sydney.