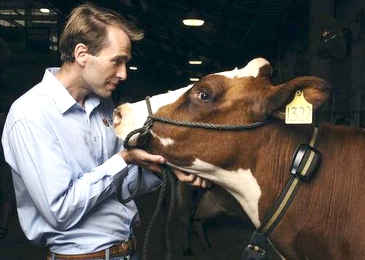 Keeping track: Cameron Clark and Anna model an electronic band used to feed information about the cow to the farmer. Photo: James Brickwood

Meet Anna. This 2½-year-old Ayrshire cow is a pin-up girl for modern dairying. Rather than wearing a bell around her neck, she is wearing a rumination and activity sensor that will tell the farmer when she is ovulating, when she is about to calve, when she is eating and when she is sick. Soon it will be combined with GPS tags so the farmer can track everything that Anna does 24 hours a day from the comfort of a computer. ”We didn’t have anything like that when I was a boy,” said Barry Russell, whose parents had a dairy farm in Bega in the 1940s. Stopping to look at Anna at the Royal Easter Show on Wednesday, he said the only way to find a cow back then was by ”running around a paddock”. The new activity sensors are part of the first display of its kind by the Royal Agricultural Society of NSW to show city folk that modern farming is technology- and data-driven.The display includes drones, used increasingly to survey pastures for drought or weeds; glasshouse tomatoes grown with 90 per cent less water and fertiliser than traditional field tomatoes: electricity generated from rubbish and pig faeces, and a portable methane digester. Cameron Clark, from the University of Sydney’s Future Dairy, said the research was designed to reduce the repetitive tasks so farmers could have time to analyse data and be proactive.Anna’s tag contained an accelerometer – like a spirit level – that measured activity.This could tell the farmer when a cow was coming into heat because the cow tended to jump more.In addition, a rumination detector recorded when a cow was eating or not, useful because cows tended to stop eating before they calved or when they were sick. ”We will be able to work out where they [the cows] are, what they are doing, and improving methods of detecting oestrus, sickness, lameness,” Dr Clark said. By tracking patterns before calving, for example, they would be able to predict which cows would have trouble and thus reduce deaths. Dr Clark said Generation Z – online, data crazy and computer literate – were the future of farming. Agronomy student Hamish Doherty, 19, agreed. He said farming had ”changed heaps”. ”You don’t have to drive a tractor any more,” he said. ”With precision agriculture, you can use all different images from unmanned aerial vehicles. And the drones tell you where the green spots are on your land, they send you different images, and can detect nutrients in the soil.” Read more: http://www.smh.com.au/nsw/royal-easter-show-electronic-monitoring-on-the-farm-has-all-the-right-mooves-20140416-36s3t.html#ixzz31Z1jIpSk

Article is courtesy of The Sydney Morning Herald published 17/04/2014.